Congratulations to Dan on being the Appalachian Trail Conservancy’s Volunteer of the Month for August 2017. 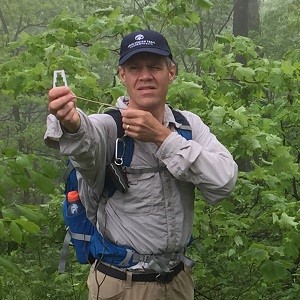 Dan Firth has volunteered 500 hours on the Appalachian Trail with the Tennessee Eastman Hiking and Canoeing Club. He has served on its A.T. committee, monitored rare plants, and recently became an A.T. section maintainer. He monitors seven phenology sites along his Trail section, which involves tracking and reporting seasonal changes in the life cycle of the species being monitored. Since retiring from the Eastman Chemical Company last year, he has eagerly taken on more responsibilities.
Matt Drury, ATC’s Southern regional resource management coordinator, says, “Dan is our most prolific rare-plant monitor in the region, and often seeks new populations to monitor. He is also helping us monitor for ash trees and the emerald ash borer and will be surveying most of the likely ash sites on the Trail in Tennessee this year. This information will help managers prioritize areas for treatment against the emerald ash borer.”
This year, Dan and Matt are conducting a campsite survey of Roan Mountain, covering more than 20 miles along the Trail. The Roan Highlands area has the highest concentration of rare species found along the entire A.T. They are surveying areas impacted by camping, classifying the ground cover into condition classes, and looking at canopy cover, exposed soil, and other conditions. The next step will be to analyze the data and develop a report for Trail managers.
Dan lives in Kingsport, Tennessee, with his wife and their son and daughter. A section hiker, he has completed the Trail from the Springer Mountain approach trail to Front Royal, Virginia. He was involved in Boy Scouts as a youth and with his son, and he continues to be involved with the Sequoyah Council. Besides the opportunities for outdoor experiences and education, Dan says that the Scouting emphasis on service and volunteering often has an impact that carries into adulthood.
Dan most enjoys monitoring the rare plant populations and appreciates the ability to make a difference as a volunteer: “Having a scientific basis for decision-making through observation and analyzing impacts on rare plants and on the biodiversity of an area is key to protecting them.” The data he is gathering will provide important information to Trail managers on protecting rare plants.