Tim Schaefer Reporting
Frozen waterfall hikes in this area can be fickle. Although the beginning of the New Year was cold, we finished the week with some warm days. This apparently melted away whatever ice may have formed. It didn’t matter, as often, the destination is a motivator, but it’s the journey that is enjoyed best. The hike began at US321 to the AT and on to the falls. After enjoying a cool (but not frozen) stop at the falls for lunch, we decided to hike up out of the gorge to see the Koonford Bridge redone in 2014. The hike was more steps than I remembered the last time I visited here five years ago. We made it to the bridge and returned except staying on High Water Trail to see more trail (but really to avoid the descent back into the gorge). Joining us today was the Schaefer Family (Tim, Carrie, Jamie, Bob, Josie), the Zimmerman Family (Yuyan and Frankie), Jeffery and Amy Bryan, Gabrielle Ashley with dog Lucy, and Andrew. 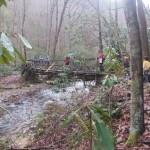 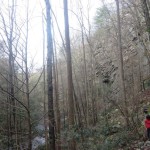 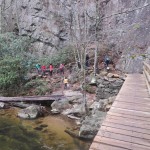 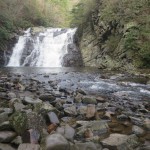 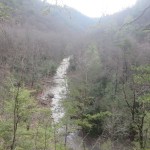 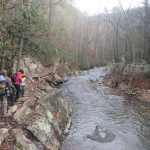 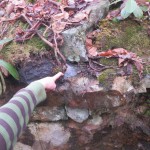 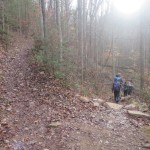 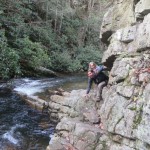 We were blessed with a very comfortable Sunday afternoon for our 2.6 mile round-trip hike to Laurel Falls. This is a very family-friendly hike with the only somewhat challenging part being the actual walk down and back from the waterfall. This path is make of large stepping stones some of which are easier to navigate than others. But with reasonable care the route is well worth the reward.

There was a decent amount of flow over the falls, but the water level was lower than I had seen it before. Lydia and Paul enjoyed cooling their heels in the creek and several other hikers at the falls were swimming. Extreme care should be taken in the water below the falls since a father and son tragically lost their lives here in July, 2012. There is a small plaque in their memory attached to a rock at the bottom of the steps. Probably the most excitement today came from watching some swimmers (not part of our group) try to capture/kill(?) a small water snake of some kind. We weren’t close enough to tell what kind it was, but they were approaching it like it was a man-eating python. The snake eventually made its escape swimming on down the creek. 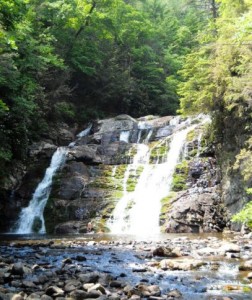 Vic Hasler and I quickly carpooled from Colonial Heights to the Hampton trail entrance.  The day was a hot one in the 90s.  This route to the falls is an easy 2.4 miles.  Once there, we saw Bob Peoples and family.  Vic went up the rock stairs to the “High Water” trail to check on some geocaches while I hiked back the original route until we met at their intersection.  Overall, we saw several snakes and lizards, plus plenty of roadside fireworks stands on the way home.  The wiki for this trail (link) was updated with photos and map trace.