TEHCC is blessed with some of the richest diversity of plants and animals of any section of the Appalachian Trail. Much of this diversity stems from the Roan Highlands, high mountains which are further north than the other 6000′ peaks in the Southern Appalachians and provide “islands” for species normally found much farther north. Such species are often referred to as “northern disjunct species”. Other species can be found elsewhere but still are noteworthy along our section.

The rare and beautiful Gray’s Lily is found in only a few of the highest locations in the Southern Appalachians and is at its most abundant in the grassy balds along the Trail north of Carvers Gap and in grassy openings near the Cloudland hotel site.

This striking, tall flower whose bloom peaks around July 4 can reach up to 6′ high with multiple bell-shaped orange-red blossoms. Its habitat is threatened by encroachment of blackberries and woody plants onto the balds, with efforts to preserve it through grazing and mowing by the Forest Service and volunteers. Please do not pick this flower! If you are interested in helping in its preservation, please contactJudy MurrayThis e-mail address is being protected from spambots. You need JavaScript enabled to view it. 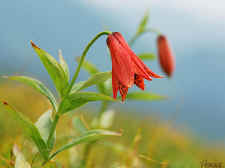 Did you know that not all bluets are blue? On Roan Mountain, some are pink! The Roan Mountain Bluet is taller than the common mountain bluet and is on the U.S. and Tennessee endangered species lists. Like many rare plants in the Roan Highlands, it is found most often on rocky outcrops, which hikers should stay off despite the tempting views.

The most showy display of Catawba Rhododendron in the U. S. is found atop Roan Mountain in the Cloudland rhododendron gardens, and along the balds east of Carvers Gap to Grassy Ridge. he natural “gardens” are world-renowned for their display, which generally peaks between mid-June and July 4. Weekends during that period can be quite crowded atop the mountain, but an evening visit during the week can provide much more solitude. One of the great hikes in the world is the section of the AT from Carvers Gap to Grassy Ridge during the bloom, where Flame Azalea joins the rhododendron to provide memorable displays from the grassy balds and rocky outcrops. Many very rare plants grow on these outcrops, so please stay on the trails. 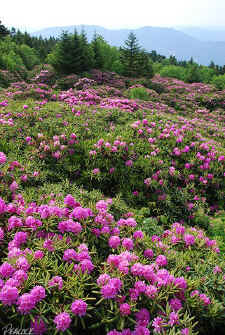 Fraser Fir is the Southeast’s only native fir tree, ranging from the Grayson Highlands of Virginia to the Smokies and Great Balsam Mountains, and is found nowhere else in the world. Though plagued by the balsam woolly adelgid and air pollution, a particularly healthy forest grows Trail south of Carvers Gap along the crest of Roan Mountain. The high elevation and dense forest make this a great hike on a hot summer day. The more widespread Red Spruce is often found with the Fraser Fir, and the summit of Unaka Mountain is in a dense red spruce forest.

Carolina Hemlock is fairly common along the Blue Ridge, but along the Tennessee/North Carolina border it is found only in our section. This hemlock variety can be distinguished from the more common Eastern hemlock by its smaller size, longer needles, size and arrangement of its cones, and rounder orientation around the stem. It is found on rocky bluffs above rivers and streams, most notably on Cliff Ridge above the Nolichucky River, in Laurel Fork Gorge, and in Big Laurel Branch Wilderness above Watauga Lake. Like the Eastern hemlock, the Carolina hemlock is threatened by the hemlock woolly adelgid, and with its already lower population density may soon become a state threatened and endangered species.

At Carvers Gap between the highway and back parking area, there is a thicket of short, shrubby deciduous trees which are found in the grassy areas atop Roan Mountain and on to Grassy Ridge, but nowhere else until a northbound hiker reaches Pennsylvania. This northern disjunct species is the Green Alder. It has basically taken over the top of Jane Bald, where it is crowding out Gray’s lily, but itself is a rare species and also harbors others such as the Alder Flycatcher.

There are many different birds of prey along the TEHCC’s AT section. Of course many common hawks and owls can be seen and heard (and the sound of a barred owl is one of the most startling sounds a hiker can hear in the woods), but we are blessed with some rare ones. In 1990 TEHCC began working with the Forest Service on a Bald Eagle hacking project on South Holston Lake, resulting in introduction of 30 eagles over a four year period. While an eagle sighting is exceedingly rare, it requires much less luck to spot an Osprey while hiking around Watauga Lake. Peregrine Falcons are natives to the high mountain cliffs and can be seen in the Roan Highlands. Some of these cliffs are under closure orders to protect their nests and hikers should comply with such notices, you really don’t need to be there and they do. Another northern disjunct species which you should count yourself very lucky to hear is the Northern Saw-Whet Owl. This very small owl, only slightly larger than a robin, dwells in the spruce-fir forest, and its call has been likened to a garbage truck backing up.

A true success story in the Southern Appalachians is that of the Common Raven. As its name implies it was quite common throughout the region, but had been reduced to only a few, high elevation sites by the 1960’s. They can now be seen – and more often, heard with their loud “cronk” call – throughout our section.

Not all of our critters are universally loved. We have two varieties of poisonous snakes, the Timber Rattlesnake and the Northern Copperhead. The timber rattler is much more venomous and should definitely be given a wide berth. Fortunately, it usually announces its presence before you get right onto it. Copperheads don’t give that warning and a copperhead bite can be very painful (as this author can attest) but rarely is life-threatening to a healthy individual. Both species are found in rocky areas and are most frequently observed during dry periods. The best way to avoid a painful encounter is not to put your hands or feet under rocks or logs. Though poisonous snakes are understandably frightening, the woods are their home. Rattlesnake populations have declined significantly due to habitat destruction and hunting, and many copperheads are also killed every year, along with non-poisonous water snakes which are often mistaken for copperheads.

Bobcats are rarely seen, but their tracks are often recognizable in the snow. These solitary hunters, about twice the size of a domestic cat, like rocky dens. One came out to see us at Carvers Gap at dusk one evening. It looked cute until it came back for a closer look!

The Red Fox has had difficulty competing with the coyote in much of its traditional range in the farmlands, in part because they do not cope with humans as well as the coyote with so much farmland being broken up for development. They do however continue to thrive in the mountains. We crested a knob above the Nolichucky River one snowy day to see a red fox in the middle of the Trail with snow on it, one of the most memorable sights we’ve ever had on the AT.

Whitetail Deer are not as abundant in the mountains along our Trail section as they are in Virginia and Pennsylvania, but their populations are growing and they can be seen frequently. Deer hunting is allowed and is common throughout almost all of our Trail section. Hikers planning trips in the fall are encouraged to check the hunting seasons in Tennessee and North Carolina (and Virginia for our northernmost three miles), wear blaze orange in season, and consider staying home or hiking in a park which does not permit hunting on the first few days of rifle season.

The most famous four legged creature in the Appalachians is the Black Bear. Check it out here.