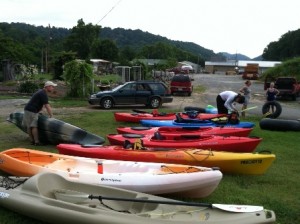 The flat water series continued on 6/18 with a new section for me and most others.  We had a large group of eight folks who were looking for a relaxing paddle and new territory.  Jamie and Eric decided to go upriver a bit as we only expected to cover two miles today and they added on a mile or so.  The rest of us cruised on down to Weber City counting the times that I got stuck on the shoals.  The river was lower today with quite a few shoals.  I managed to show everyone how not to go down on the river.  I did triumph at the end, as I was the only one in the front group not to get stuck on the last set of shoals, but only because Kent went first to show me where not to go.  The river today was exceptionally clean and very very private.  Just like last time, we had a protective blue heron that flew ahead of us, waiting patiently for us to catch up before starting off again.  We just barely made it off the river before the thunder started.  I think Jamie and I were the only ones who were still strapping our kayaks on the cars when the sky opened up.

Next year I plan to do this run much earlier in the year since there are no dams controlling the flow and you are left with Mother Nature.  Until we get much more rain, I plan on running the water-controlled sections only, unless someone just enjoys walking a few sections.  On this run today were Jamie Aiello, Steve and Caroline Rochelle, Kent and Nancy Wilson, Sarah Dalcher, Eric Belsford and Deb Reynolds.  By the way, Eric is from Knoxville and he found our group via the web prior to learning about any of the Knoxville groups such as CHOTA.