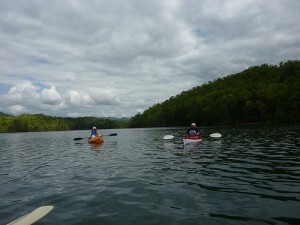 I headed out on Thursday night right after work to drive the 3 hours to the campground at Cheoah Point.  Islander had already arrived early that morning.  I got there right at dark:30 as usual.  With help from Islander and his incredibly bright flashlight (what was that thing?), I set up down in the woods.  It was a really nice place with good bathrooms and hot showers!  I pulled out my Bushbuddy and fixed a little coffee to wind down a bit before heading to my hammock.

The next morning I woke up to a beautiful morning.  After breakfast and packing up we decided to drive up to Deals Gap to maybe grab a BBQ and look who we found!  Rain Man and Stitch had just finished their lunch and they told us the line had gotten really long right after they got there.  So we decided to wing it and have our packed lunches instead.  We headed straight to the boat ramp and started loading, then shoved off about 2:00.  We paddled past many beautiful homes and beautiful scenery too!  We checked out a couple of possible camping spots and after a lot of exploring, Islander finally found us one!  After getting our rigs set up, we settled into cooking dinner.  We had charcoal so steaks and brats were thrown onto the barbie!

The second day we decided to tour the rest of the lake, go to the opposite boat dock and check out the District Rangers Station.  It was closed, but we saw enough to see it is a very nice facility.  All day long, clouds rolled in and out and storms threatened.  We could hear thunder in the distance, but we didn’t get anything more than sprinkles and short intervals of passing rain clouds.  We were on the LUCKY side of the lake I think!  After we got back, it was show and tell time, inspecting each other’s rigs.  I don’t have a pic, but Rain Man had a really cool level on his ridge-line that I will be looking for in the mason line section of Home Depot.  I got to show off my new custom made hammock by Detail Man in digital camo.  And Stitch really liked my Molly Mac Hammock Sock.  Islander had his Switchback under a Macat Deluxe and he let me try it out.  When I’m ready to buy another hammock, it will be one of those!!! It was so comfortable and flat!  Rain Man was in his Hennessy with a Macat Deluxe, and Stitch had an ENO Double Nest and a “Neo” Guide Gear 9×9 Camo.  And yes my tarp is yet again another Macat, but the Ultra model with the pole mod added. 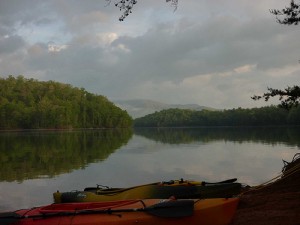 We had a fire the whole time as I brought some firewood from the wood shop and the Bob’s Quick Saw.  The fellows had a good time with it I think, because we left a lot of cut wood for the next campers!  The next day was a little cooler; the temperature was dropping a degree every moment.  We packed up early and headed back.  With the weather rolling in, we had a strong headwind all the way back.  I dipped in behind the points to get a break from the constant battering during the 4½-mile passage back to the vehicles.  Rain Man and Stitch decided it was best for them to stop at the marina and have one of us come back for them in a vehicle.  It was because their short boats with no skirts were getting pushed around a bit and water was being blown across their bows at times.  Islander and I busted our tails to get back in record time.  By the time we reached shore, I was cold and anxious to get on the dry clothes that were waiting for me in my car.  I also had packed a shower bag and when we all got loaded up, we went back to Cheoah Point to get cleaned up.  That was a highlight of the day too!  But I think what topped the day off was the stop at the Carolina Kitchen in Robbinsville for barbecue, local-caught trout, and deep-fried Oreos! “Yeah Honey… I Looove the South!”  I want to thank everyone for coming and making the trip a success.  I want to especially thank Rain Man for letting me borrow his pics to write this report.  If you want to see his whole album, click HERE.