Tim Schaefer Reporting
Hike Date: 12/13/2015
The Zimmerman family joined us for this 3.26mi hike on [[NTSP Purchase Ridge Trail|Purchase Ridge Trail]] at [[Natural Tunnel State Park]]. It was a great late fall day and fun was had by all. The trails were in good shape and the views of the tunnel were fairly clear to see with the absence of foliage. As luck would have it, shortly after starting our return we hear a train whistle in the distance. The trail head is a little hard to find with no clear parking area near by but the detail on the wiki was good enough to get us to find it. Since the campground was closed we parked at the camp store, but it’s not clear where you would park in the summer months. Having fun was the Schaefer Family (Tim, Carrie, Jamie, Bob, Josie and dogs Zoinks! and Beetle) and the Zimmerman Family (Yuyan and Frankie). 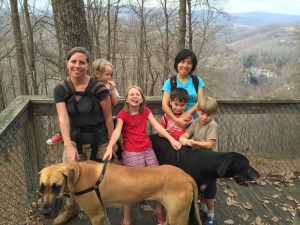 Leaders: Tim & Carrie Schaefer, 423-302-0846
Rating: Family/Beginner
Come on this Family/Beginner hike to view the Natural (Train) Tunnel in Virginia. The plan is to depart the Colonial Heights meeting location at 12:30 and be at the trail head and on the trail by 1:30 pm. Prior contact is not required but is appreciated so we know to look for you. Contact hike leaders Tim & Carrie Schaefer for caravan or carpooling, 423-302-0846, timcarrie@tehcc.org

The warm, sunny afternoon with a chance of thundershowers did not deter our feisty group of hikers. They weren’t even too discouraged by the leader’s difficulty in locating the planned starting point for the hike – a little whiny, but not discouraged. My wife, Beverly, and I met good friends, Lowell and Betsy Biller at Natural Tunnel State Park to hike the Purchase Ridge trail. The plan was to get on this trail in the campground, compete the loop at the end of this trail and return via the Cabin Trail and the campground road.
The starting point proved to be a little hard to find, so it was decided to do the planned route in reverse. We walked up the road to the Cabin Trail and hiked to where it joined the Purchase Ridge Trail. Since we had already some extra walking on the Gorge Ridge Trail to Lover’s Leap Overlook and because of more whining from certain hikers, it was decided to omit the loop and head back to our originally planned starting point on the Purchase Ridge Trail. It was cooler after we actually got in the woods on the trail. The leader no longer feared a mutiny. But seriously, it was a fun afternoon with friends in a beautiful part of our region. Our total distance was about 3.5 miles, not much more than the 3.25 we had planned.
We discovered the planned starting point is actually off the right side of the road about 100 yards past the camp store. It is off the road several yards at the edge of the woods and there is no sign marking the trail by name. There is a sign showing all the trails, but it’s easy to miss if driving down the road.

You may be thinking that with Fall quickly approaching (or is it here already?) the activities will be slowing down. Well they have according to our schedule, except for our Fall Dinner this Friday of course. Rehash your summer adventures with friends and good food from Firehouse Restaurant. Stick around for (or come just for) Toney Scales as he discusses the Southwest Virginia Trilogy: Natural Tunnel, the Breaks, and Cumberland Gap. Details in the newsletter.