Stan Murray will be inducted into the Appalachian Trail Hall of Fame on June 5, 2015. 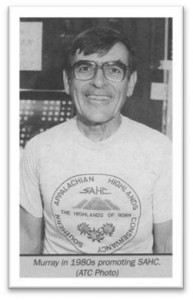 The application cites the following three accomplishments and more…

While serving as Board Chairman of the ATC for 14 years, Murray played a major role in getting the National Trails System Act passed in 1968 to establish the Appalachian and Pacific Crest National Scenic Trails and authorize a national system of trails to provide additional outdoor recreation opportunities and to promote the preservation of access to the outdoor areas and historic resources of the nation.

He was president of the Southern Appalachian Highlands Conservancy for 11 years, and was later named its first executive director. The SAHC acquired thousands of acres of the majestic mountains along the border of North Carolina and Tennessee through which the A.T. passes. He also led the Tennessee Eastman Hiking Club’s 74-mile relocation of the A.T. from its original route on roads and valleys to the present spectacular route through the Highlands of Roan.

Murray was one of the first advocates of the greenway concept, which led to the present trail corridor through which the A.T. passes. He led ATC’s move to a permanent headquarters facility in Harpers Ferry and hiring a full-time executive director and other important staff positions. He passed away in 1990 at age 67.

Judy Murray will be attending the June 5th Appalachian Trail Hall of Fame banquet in Boiling Springs, PA to accept the award on behalf of her late husband. TEHCC is proud to claim the leadership of honoree Stan Murray among its history.