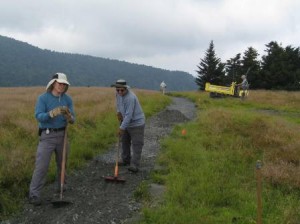 Twenty-four volunteers worked long hours and under sometimes adverse weather conditions to make this happen. On Saturday, July 7, a crew retrieved large locust logs from the old Appalachian Trail. The temperature was very high with full sun, high humidity and no breeze.. By early afternoon we were all showing signs of heat exhaustion and quit, but we had retrieved about 40 logs.

On Monday, July 9th we started a two-shift per day operation with a Kubota tractor with a front end loader and two rented Yanmar C12R-B tracked vehicles to haul the gravel up the trail to as far as Round Bald. At least eight people per crew were needed to run the three machines, direct traffic on the road, repair the trail at corners where tracked vehicles tore up the treadway, and smooth the dumped gravel and install water bars and steps as possible. Some even volunteered to stay overnight to guard the equipment. 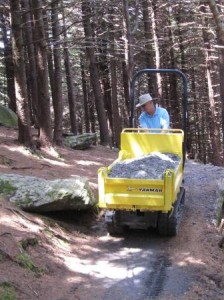 Volunteers had little idle time, especially as the week progressed because the machines were making the round trip very quickly. The machine drivers became very skilled in maneuvering the tractor and tracked vehicles. Some even learned to spin the machines 180 degrees in place.

The determination of the volunteers was obvious on Wednesday when there was an all day down pour. One member commented, “We are certified crazy.” At least five on the first crew were blue with cold when the second shift arrived. The second shift members were immediately out of their vehicles in the downpour and relieving the first crew to get them into warm vehicles.

Special thanks to David Quillen who provided the tractor, hauled all the equipment from and to Asheville, fueled the vehicles, and kept the machines operating mechanically, besides running the machines each day. “Roman Wall” as a non-club-member is to be thanked for his multiple shifts, some being consecutive, plus an overnight stay. Morgan Sommerville was instrumental in the rental of the two machines. 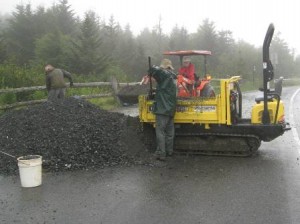 The North Carolina Appalachian Trail License Plate grant was the primary funding source for this operation; so keep purchasing those AT license plates. TEHCC funded the remainder.