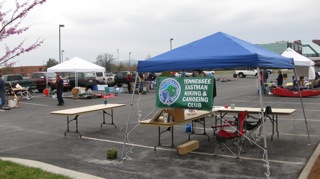 Saturday, March 26, TEHCC had their first gear swap on the grounds (parking lot) of the Eastman Recreation Building.  We weren’t sure what to expect since this was a new event and not sure how the community would react, but my expectations were more than met.  I think the event was a success and worth doing again next year.  We had eight groups sign up in advance and had at least ten groups show.  The morning was much colder than expected which probably helped with the attendance as we had people coming and going most of the morning.  We saw new Jackson kayaks, some used kayaks and a canoe, bikes, hiking and camping equipment, boots, clothing and snow skis. The Girl Scouts were there selling cookies.  One group even had a container marked as free.  Another group came from as far away as Knoxville to sell a kayak, skis, bike parts and clothing.  I don’t know how much overall was sold, but I noticed that a really neat fishing kayak disappear, as well as a bike, from just one of the participants.  The APEs (Appalachian Paddling Enthusiasts) showed with a booth as well.  Kudos to Ian Powell and the steering team for the planning, and to other TEHCC members who helped coordinate.  TEHCC members attending were Ian Powell, Vic Hasler, Deb Reynolds, Steve Perri, Josh Henri, Waylon Jenkins, Mike Rehart, Greg Smolen, Aaron Grills, and Richard Elliot.